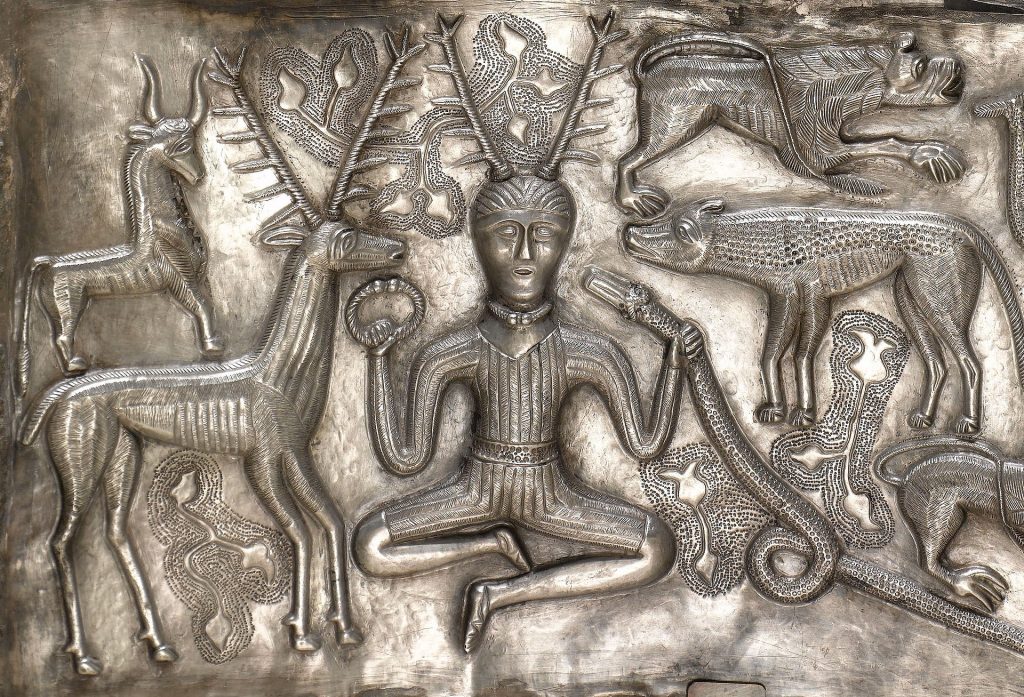 Cernunnos is a late reflex of the ancient hunter-god known in the Neolithic period and earlier. The name has been found on the Pillar of the Boatmen, built in the first-century AD. The relief shows the name above an antlered god with both deer and human ears with a torc over each antler (the second panel from the top on the left) The spelling Cernenus appears in a dedication where the name of the Celtic god appears with that of Jupiter. Usually the Romans associated Taranis with Jupiter; as you see, the gods can’t be equated with each other with any precision. The concepts of godhead vary greatly.

Cernunnos on the Pillar of the Boatmen

For example, Celtic society consisted of a hierarchy with a king, warriors and the druid order who were the high-ranking members; farmers and some craftsmen were lower ranking. The business of the warriors was, of course, fighting; displaying fighting prowess improved status. Mars, the Roman god of war, was adopted early and associated with Cernunnos with his ram-horned snake.

Note: a torc is a neck ring of twisted metal, often gold, worn by the nobility. The torc doesn’t form a complete circle. It has a gap, the primary meaning of the word torc in Gaelic. Also the word for boar.

The horned god was worshipped throughout the regions settled by Celts, and the cult sites are associated with water. At Bordeaux, an image of the god was carved in relief—semi-naked, horned, holding an anchor. He is associated with a serpent, perhaps he and his snake may be the origin of legends such as St George and the dragon, Fraoch and his water monster/dragon, St Patrick and his snakes, Beowulf, etc.

The veneration of horned animals, including the stag and the bull, are part of the early religion of the Celts. Cernunnos, the horned god, is accompanied by the ram-horned serpent.

The theme of horned male heads, horned beasts and the heads of bulls or rams surmounted upon human heads was widespread. A representation of Cernunnos from the 4th century BC was found in Val Camonica in northern Italy.  He is portrayed in an upright posture with his feet turned inwards, and wears a torc and a long garment or cloak.

The cult was well-established particularly in Belgica at the time of the Roman conquest of Gaul in the first century BC. Belgica is now north-eastern France and Belgium. In Latin the name of their country inspired the name of the modern country of Belgium.

Cernunnos means horned one in Gaulish, an ancient Celtic language, and he was often pictured with a serpent. Conall Cernach was one of the legendary heroes of the Gaels of Scotland and Ireland. Cernach probably means ‘horned’. In the Táin Bó Fraích (Cattle Raid of Fraoch) a serpent leapt onto Conall’s belt but did him no harm. A snake is associated with a horned god in the medieval story of the cattle raid, written about 800 AD.

Note: Fraoch can mean ‘heather’ in Gaelic, but here it means ‘rage’. So the hero of this cattle raid story is not a man to be trifled with!

Còrn in modern Gaelic means drinking horn or musical instrument, and very large drinking horns were made from the horns of the urus or European buffalo. Drinking alcohol from these horns was part of the ritual of warriors before battle. In the Old Gaelic story, Sgéla Mucce Meic Da Thó, describes how food is distributed depending on status and fighting prowess.

An amazing survival of the period when Celts lived throughout Europe and Cernunnos the important god of the hunt.