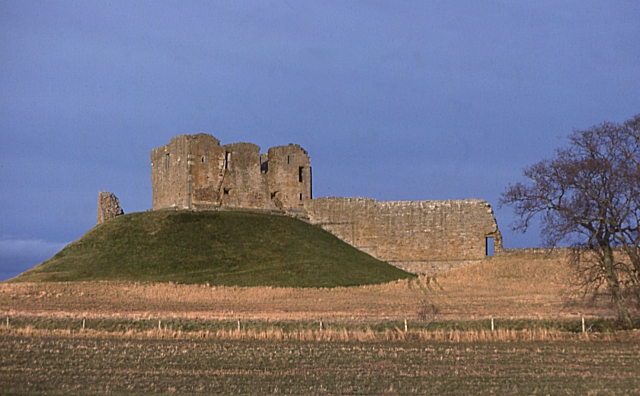 A few castles existed in Britain before the Norman Conquest (1066) such as Ewyas Harold in Herefordshire) and Clavering in Essex, built by Norman favourites of Edward the Confessor in the last years of the Old English kingdom. The English monk Odericus Vitalis (c.1175-1243) gives the lack of castles in England as a reason for the success of the Normans. ‘For the fortresses which the Gauls (French) call castella had been very few in the English provinces: and on this account the English, although warlike and courageous, had nevertheless shown themselves too weak to withstand their enemies.’ William and his Norman followers built small castles all over Britain. And the English monk complained that the Normans ‘sorely burdened the unhappy people with forced labour on the castles, And when the castles were made they filled them with devils and wicked men’.

A motte-and-bailey castle was a quick and easy way to build a defensive structure. William the Conqueror built one in a month, the first of many which ensured his conquest of England and Wales. They weren’t long used, but they served their purpose admirably. The Normans preferred to fortify a hill if one were available. But they made a motte, an artificial mound when they wanted a defensive structure on flat land.

The top of the mound was flattened, and a wooden tower or donjon was built on top. It could be used as a lookout tower or the last refuge in an overwhelming attack. The bailey was an enclosure which contained the residential buildings: a great hall and chamber, a separate kitchen building, chapel, stables and barns. The bailey was enclosed by a palisade of wooden posts (like the forts of the Old American West), connected by a wooden bridge or gangway. The bailey was usually circular and many castles had two baileys.

The distribution of over 700 motte and bailey castles shows a thorough conquest of England, a partial penetration of Ireland and a strong presence in the Lowlands and eastern seacoast of Scotland. Motte-and-bailey castles were densely constructed on the border of England with Wales as the Welsh fiercely resisted the Normans.

In the 11th century, the stone began to replace wood as the primary material for castle building. The tower on the motte was replaced with stone, then the gatehouse and finally the palisades were constructed in stone. The new stone donjon or keep made the living quarters defencible, but they made life uncomfortable and expensive. The largest of the 12th-century castles were repaired and continued to be used, but their function changed from primarily military to more administrative. Castles were constructed in ways which allowed a royal palace or a noble residence to be more comfortable.

At first, stone towers were built on top of the artificial mounds to replace the wooden towers, but they were too heavy and the mounds were abandoned. The supporters of Robert the Bruce burnt Duffus Castle, near Elgin, three times because its owner remained loyal to John Balliol and Edward I of England. Edward awarded him 200 oaks from England to help with rebuilding.

Duffus Castle: Sliding down the Hill