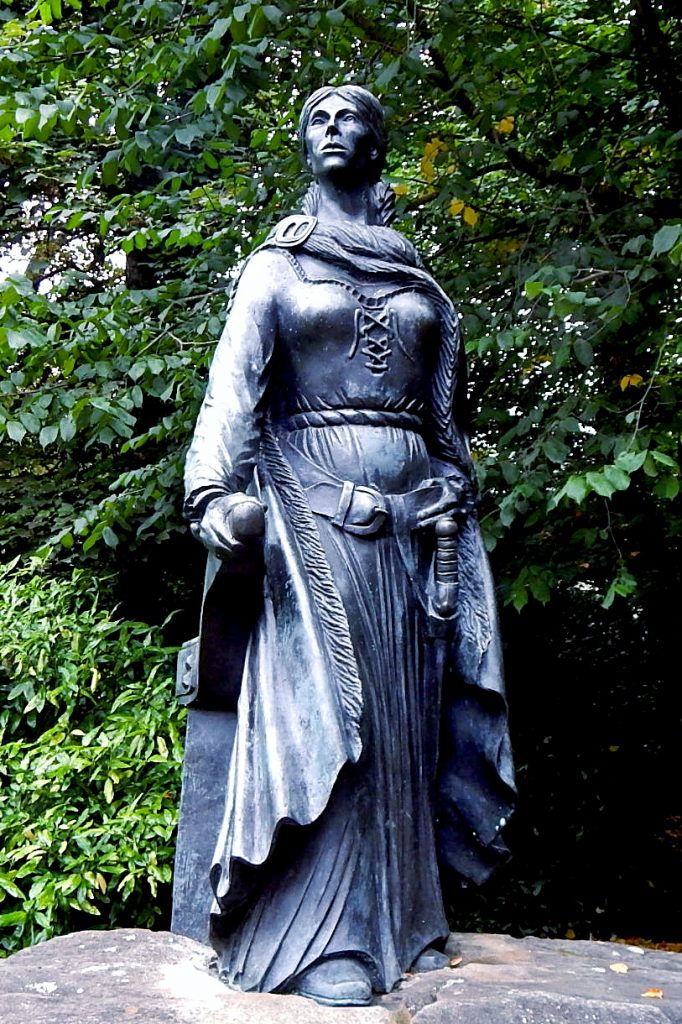 Grace O’Malley is famous (infamous?) as a ‘pirate queen’ in English records of the 16th century. But was she a pirate or a queen?

The O’Malleys, the Uí Máille, held the Umhall (the Owels), a region of great beauty in Connacht on the west coast of Ireland. Iar Connacht was the land of the O’Flahertys, who were south of the O’Malleys. Nearby is Croagh Patrick, Cruach Phádraig, a stack-shaped mountain, perhaps the most famous site of pilgrimage in Ireland. A very storied region.

Grace O’Malley or Gráinne Ní Mháille, as she is in Gaelic, was born about 1530. Her father was Eoghan Dubhdara Ó Máille, who was king of the O’Malleys and lord of an ancient and powerful dynasty in the province of Connacht. Did you notice I said king?

Leaders of Gaelic Ireland are called chiefs or chieftains in English; however, they were kings, ríthe, in Gaelic law if they were inaugurated on mounds at ancient neolithic sites. Several levels of kingship existed, and a single kingdom could be quite small. The O’Malleys and the O’Flaherties elected and inaugurated kings. Their wives, therefore, were queens, ban-ríonacha.

The Lebor na Cert (Book of Rights/Justice) lists the tribute owed to the king of O’Malleys:

The Annals of the Four Masters also says O’Malley was a king. Note the early date.

AD 1123 Tadhg Ua Máille, king of Umhall, was drowned with his ship at Ara.

The Ó Máille family’s money came from the seas, a tribute levied on anyone who traded or fished off their coastlands. The family were also shrewd merchants, trading as far away as Spain. Raiding and exacting tribute was the ‘done thing’ by Gaelic kings in Ireland and Scotland to support and reward their followers for centuries. Gráinne followed the ways of her ancestors.

Grace or Gráinne was about sixteen years old when she made a political marriage to Dónal Ó Flaithbheartaigh, the heir to the king of the O’ Flaherties. In The Annals of the Four Masters, an O’Flaherty king died in the 12th century:

It was an excellent dynastic match, and she bore her husband three children who lived to adulthood. After her husband was killed in an ambush about 1565, Grace and her followers established her headquarters on Clare Island.

Her second marriage was to Richard an Iarainn Burke. Iarainn means ‘iron’ and it may have referred to his character or a mail shirt. The Burkes were descended from Anglo-Normans who invaded Ireland in the late 12th century, but the Burkes became completely Gaelicised and even gave up their seat in the English parliament in Dublin. According to the English administration, they were no different from the ‘wild Irish’ living ‘beyond the Pale’.

The O’Malleys–Living beyond the Pale

The word ‘pale‘ comes from French pal and Latin palus meaning ‘stake’ or ‘post’ which formed a palisade (similar to army forts in the Old American West). The English only controlled the four counties around Dublin known as ‘the Pale’, and those who lived beyond and spoke Gaelic were ‘wild Irish’.

Both the O’Flaherties and the Burkes recognised Gráinne’s leadership qualities and preferred to follow her rather than the traditional leaders of their clans. Within a year she and Richard an Iarainn divorced while she was pregnant and living at Rockfleet Castle, her marriage portion. According to legend, the day after giving birth to her ex-husband’s son aboard ship, she leapt from her bed and vanquished Turkish corsairs attacking her ship. What a woman!

To the Gaels, Gráinne was a queen. But was she a pirate? A pirate is an outlaw. Elizabeth I granted men licenses to prey on her enemies, particularly the Spanish. And that meant these Englishmen were called privateers, not pirates. Of course, the Spanish considered them pirates. She did not give Gráinne a license to raid; therefore, the English considered her a pirate. But Gráinne didn’t believe she needed the English queen’s permission to do what her status entitled her to do.  In Gaelic terms, she was not a pirate, she was a queen, a member of the Gaelic elite, and she took tribute from those who came into her orbit.

To the English, her novelty was that she behaved like a man. A queen even among the Gaels did not usually sail, trade or raid. She was a support for her husband and the mother of their children. She dispensed hospitality for the honour of her husband’s clan.

Sir Richard Bingham, the English governor of Connacht, captured Grace’s son. Bingham was sent to Ireland as part of another English effort to conquer Ireland, and in 1586 his men killed one of Grace’s sons. Bingham also took cattle and land from Grace. She could not let the slights and injuries to her family go unanswered.

Yet she knew that she couldn’t hope to beat Bingham and the forces of the English government single-handedly. Instead, she took the diplomatic route and travelled to England, where she requested an audience with Queen Elizabeth I to discuss the release of her son and the seizure of her lands.

She argued that the tumult reigning in Connacht had compelled her to ‘take arms and by force to maintain [my]self and [my] people by sea and land the space of forty years past’. Bingham called Gráinne the ‘nurse to all rebellions in the province for 40 years past’ and urged the queen to refuse to see her. Perhaps the English monarch was intrigued by this notorious Irish woman and granted the audience. The two women met in September 1593.

The Greenwich Palace summit with the queen has become legendary. Tradition says she refused to bow to Elizabeth, whom she didn’t recognise as the Queen of England. Although dressed in a magnificent gown befitting her status, Gráinne also carried a dagger, which she refused to relinquish. The queen, however, was happy to receive her visitor—dagger and all. Some accounts say that the summit was conducted in Latin, supposedly the only tongue the two women shared. But there are letters by Grace written in English unless they were written for her by someone else.

By the end of the long meeting, an agreement had been reached. Bingham would be instructed to return Grace’s lands, pay her the funds she had demanded, and free her son. In return, Grace would withdraw her support of the Irish rebellion and attack only England’s enemies. Yet the victory was short-lived. Though her son was freed, Bingham never returned her land.

Irish people remember her spirit and courage. The Irish revolutionary Patrick Pearse rewrote Óró sé do bheatha abhaile, which was a Jacobite song, and used Gráinne as a symbol of Irish independence.

Grace O’ Malley comes over the sea,
With young warriors as her guard
They’re Gaels – not French nor Spanish
And they will rout the foreigners.