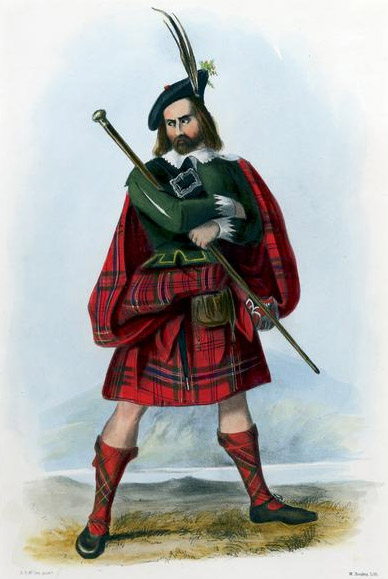 Fosterage in Scotland and Ireland was the most important form of artificial kinship meant to keep a lineage alive. The child of a greater man was fostered by a lesser man to strengthen the ties of kinship between them or to create a relationship like kinship between unrelated families. Far less important was the relationship between godparents and godchildren.

The Conditions of Fosterage

When a child, usually a boy, was fostered at about 7 years of age, a certain amount of stock and gear went with him to pay for his maintenance: horses, cattle, plaids, linen shirts, etc. The foster parents also gave their foster-son (dalta) a number of cows to ensure he was maintained in a manner suitable to his rank. He was taught skills such as swordsmanship, riding, leadership, and possibly literacy, etc. If the foster-child committed an offense the foster-father was responsible to pay compensation. If a foster- son were killed, the offender paid a fine which was one-third of his foster-father’s honour price to him. If unpaid the foster-father was obligated to seek revenge.

When he was grown, a foster-child left half of the progeny of the stock given him as a reward for his care. If the arrangement ended prematurely, the parents could reclaim the payment for fosterage. The foster-children (daltan) returned to their parents after puberty, approximately age 14 to 17 years.

The foster mother and father (muime is oide) and fosterlings (comhdhaltan) maintained affectionate relationships all their lives giving mutual help whenever necessary.

The feeling of foster-child and foster-brother is expressed in the following proverb:

A man loves his kin, but his foster brother is the essence of his heart.

In other words the foster-son felt a greater obligation to protect or aid his foster family than his biological family.

According to Barbour’s poem The Bruce, King Robert Bruce was accompanied by his Gaelic-speaking foster-brother when he was fleeing his enemies during the Wars of Independence. Exhausted they found refuge in a house, but were soon found by their pursuers. Bruce’s foster-brother was killed, but Bruce managed to fight and kill three of them. And then go on to become king of Scotland.

At least one son of a chief (triath) was fostered by a tacksman (fear-taca) and it was considered a great honour. The foster family participated in the politics of their chiefs and went to war with them. In 1651 at the battle of Inverkeithing, the eight foster brothers of Hector MacLean (Eachann Ruadh) of Duart were killed protecting their foster brother and chief after which he too was killed:

‘In their devotion for their young chief, those fearless spirits offered their own breasts to the weapons aimed at him, and as each [foster-brother] in succession rushed forward for this purpose, his resolution was evinced, as he threw himself upon the enemy to shield the person of the chief, by the exclamation of Fear eil’ airson Eachainn! [Another man for Hector]. Under the influence of this extraordinary feeling of devotion, no less than eight gentlemen of the name of MacLean lost their lives at [the Battle of] Inverkeithing.’

As you can tell by the quaint English this quote comes from a book written in 1889: A History of the Clan Mac Lean from its first settlement at Duard Castle in the Isle of Mull, to the Present Period by John Patterson MacLean. There are different versions of the story, but the point is to show the depth of feeling and commitment of the foster-brothers of the chief.

Another story concerns the guilt of a man who shielded his foster brother’s murderer. The ghost of his foster brother appeared to him and prophesied he would be killed at the Battle of Ticonderoga during the American Revolution, and the prediction came true. So they say.

Fosterage created solidarity created between clans, and controlled violence through fosterage. The custom survived until the end of the 17th century among the nobility and even longer among the gentry and well-off Highlanders.

Alexander MacDonald, ‘Social Customs of the Gael’ in Transactions of the Gaelic Society of Inverness, vol 32, 1924-25

Michael Newton, Warriors of the Word: The World of the Scottish Highlanders, 2009