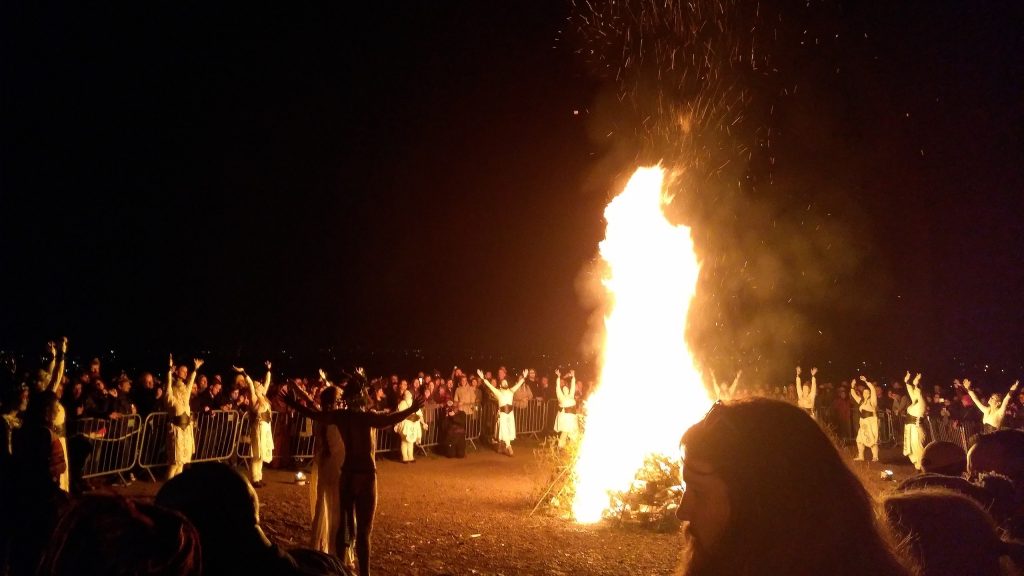 Most people know about Beltane from neo-pagans who have borrowed aspects of their ceremony from English festivals such as dancing around the May Pole and the Green Man. In Edinburgh an exuberant fire festival has been celebrated for over thirty years. Very sexy. Very exciting. However the authentic festival, which has died out, was more about protecting cattle, the basis of the Gaelic economy. But fire played an important part. Edinburgh got that bit right.

The Beginning of Summer

Bealltainn marks the beginning of summer, and the summer half of the year. Bealltainn, was sacred to the god Belenus whose cult was often found among the ancient Celts of western Europe. In English the spelling is Beltane.

Belenus was a sky or sun deity whom the Romans associated with Apollo, their sun god. Like the Roman god, Belenus was associated with healing and regeneration, an ideal god for protecting the most precious source of wealth of the Celts, their cattle. The god’s name often forms part of personal names. Cunobellinus (Hound of Belenus) was the name of a leader of the Catuvellauni when the Romans invaded Britain in AD 43.

Bel means ‘bright’ or ‘shining’ and the second part is tene, an old form of the word teine meaning ‘fire’. The early name of the festival was Beltene, ‘bright fire’. Là buidhe Bealltainn (the Yellow Day of Bealltainn) is an expression still current in the Scottish Highlands; the day was yellow because of the huge fires built for the purification of cattle.

Traditionally on Là Bealltainn (Day of Bright Fire) all the fires were extinguished and the tein’-èiginn, a fire made from friction, was lit on a hill. The fire was divided in two, and people and cattle rushed through for purification and safeguarding against ealtraigh agus dosgaidh (mischance and murrain, a cattle disease) in the year following. People took fire from the hill to each of their houses to rekindle the home hearths.

The young people would meet on the moors on 1st May. They cut a table in the green sod by digging out a trench in the ground big enough to seat them all. Then they kindled a fire, made a meal of oatmeal, eggs, butter and milk of the thickness of custard. They also made a bonnach (oat cake) and toasted it on a stone at the edge of the fire. Sometimes it had nine knobs which were pulled off and thrown over the shoulder while saying the name of the spirits which protected the herds and flocks. The predators, fox, crows, eagles who took the lambs were also propitiated with an offering from the bonnach.

Then they divided the cake into as many portions as there were people present, as similar in size and shape as possible. One of the pieces was blackened with charcoal and put into a bonnet. Each person seated at the grassy table was blindfolded and each took out a piece of bonnach. The person who passed the bonnet got the last bit, and whoever drew the black piece was the ‘sacrifice’. That person was compelled to leap three times through the flames. In times long past this was to appease a god, whose favour they sought for fertility and good crops in the following year.

Bealltainn was one of the largest of the festivals which marked the change from winter to summer. The festival had to be held outdoors at the assembly place of the clans because there were few large halls suitable for holding hundreds of people. There were contests of strength and races as well as booths for the sale of luxury and exotic goods. Musicians and poets also gathered to entertain the crowds. Quarrels and fighting were not allowed on the site of a festival, and debtors were not harassed. Highland Games developed from these festival gatherings

Bealltainn was very old festival; descriptions of the ritual from manuscripts over a thousand years old are similar to the beliefs collected from the 19th century.

According to legend, Partholon, leader of an early group of  ‘invaders’ from Spain to Ireland, arrived on a Tuesday, 14 May. He died on a Monday at Bealtaine (aka Bealltainn). The Tuatha de Danann were also said to have arrived in Ireland at this time. After spending seven years in the north of Scotland, they went to Ireland and disembarked on the shore of Tracht Muga in Ulster on Monday of the first week of May. They burned their ships which meant they could not leave. Then their druids surrounded them in a mist to hide them until they were ready to fight.

From Samhain (November) to Beltaine (May) Fionn mac Cumhaill and the Fianna, his band of men, were quartered in villages, but from Beltaine to Samhain, the summer half of the year, they hunted for food and ‘slept under the stars’.

The explanation of Bealltainn which follows was found in a manuscript of the 10th century AD—written over a thousand years ago!

The legendary hero Cú Chulainn explained Beltane to his lover Emer. Druids made two great fires with incantations. Then they passed flocks and herds through the two fires to protect them from plagues every year. And he said that Bel was the name of an idol. The firstborn of every flock was dedicated and sacrificed to Bel. Anciently people could be called to order by the shaking of a branch of small bells or the rattling of chains.