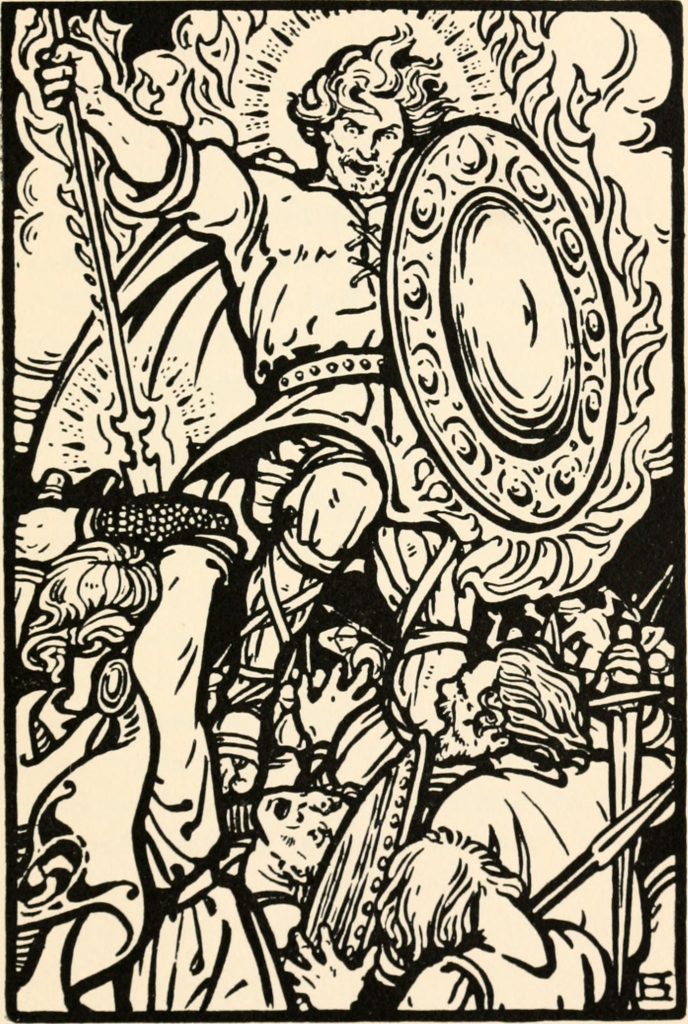 Who was Fionn mac Cumhall?

Fionn mac Cumhaill was the legendary leader of the Fianna or warband. In the manuscript tradition Fionn’s father was called Cumhall. However, in the oral tradition of Gaelic Scotland (the Highlands) he is known simply as Fionn and his warband is called An Fhèinn. He is Fingal in the Scottish Lowlands. James MacPherson composed an epic poem about Fionn in English, but called him Fingal. MacPherson knew a little Gaelic and didn’t know the name was the Old Gaelic word for ‘kinslaying’. Bad choice for the name of a hero. Some justify the name by saying that Fingal is really Fionn Gall (Fair Foreigner).

Were Lugh and Fionn the same God?

The oldest stories about Fionn suggest that he was a originally a mythological figure possessing some kinship with the god Lugh, a sky god. The two names may refer to the same god. Lugh (Bright One) was the fighter of battles with otherworld beings and had for his chief opponent the one-eyed Balor, whose eye used to burn up whatever it looked on directly. Fionn (Fair One) likewise is the fighter of battles with otherworld beings and has for his chief opponent Aodh who was nicknamed Goll: Aodh means ‘fire’ and Gol means ‘one-eyed’. (Murphy 1961: 8)

Fionn son of Cumhall was a member of the Uí Tarsig, a branch of the Corco Oche of Cúil Chontuinn. According to his legend Fionn was born after Goll son of Morna killed his father in battle.  The tribe of Morna had Norse connections and the Norse had taken possession of Ireland. To protect Fionn from his father’s enemies, his mother reared him in a hollow tree deep in a forest. When he was older he defeated other boys in a game of iomain (shinty, a sport like field hockey). After many adventures Fionn gathered his scattered tribe and made peace with the tribe of Morna. He became the leader of the Fiana as his father had been before him.

He was both seer and warrior, the possessor of great knowledge, and eventually he became king. The oldest version of the tale says that Fionn received his gift of knowledge in the following way:

When the Fian were at Badamair on the brink of the Suir, Cúldub of the race of Birgge came of the Síd ar Femun [Fairy Mound of Femun] …and carried off their cooking [pig] from them… Finn thrust successfully at him [Cúdub] as he entered the síd and he fell on the far side. While he was drawing his hand towards him he was interfered with by a woman from the síd with a dripping vessel in her hand from which she had just been distributing drink, and she jammed the door against the síd, and Finn squeezed his finger between the door and the post. When the finger came out again he began to utter an incantation; mystic knowledge illuminated him… (Murphy 1961: 9-10)

A later tale of Fionn’s youth not older than the 9th century which has survived in both literature and folklore explains the thumb of knowledge in a different way. As a boy of seven Fionn came to the river Boyne where he met a sage or druid who was trying to catch the salmon of knowledge. After he caught it, the sage or druid ordered the boy to cook it on a spit. Fionn burned his thumb on the salmon and put it in his mouth to sooth the pain. The taste of the salmon gives him knowledge of the world, and he becomes a poet and seer.

Almu at the Hill of Allen

The hero and his Fiana (warband) spend much of their time hunting or fighting for Cormac mac Airt, king of Ireland. Hunting and war were noble pursuits for centuries.

His headquarters were at Almu, identified as the Hill of Allen (Cnoc Alúine) near Tara. He and his men raided Scandinavia and Britain and elsewhere, and men from everywhere joined them.  According to legend Fionn and the Fiana lived in Glencoe, Scotland for several years and hunted in Appin. Glencoe might mean valley of dogs, Gleann Coin, but the usual Gaelic spelling is Gleann Comhann. Another translation could be the valley of comhan taisg, a place where plunder is deposited.

Fionn and the Vikings

Because Fionn fights the Lochlannaich, the Gaelic word for Norsemen, his legends are considered younger than the stories of Cú Chulainn, but elements of the Fionn story may be older although many new stories were composed about him in the High Middle Ages. The Gaels have told stories about the Lochlannaich, thought to be a wild and ruthless people from the north, for nearly 2000 years—they may refer other early Germanic tribes. When vikings raids increased in the late 8th  and 9th centuries, they were believed to be the Lochlannaich. The name MacLachlainn (English: MacLoughlin, MacLaughlin) means ‘son of a Norse man’ in Gaelic.

Raiding for plunder was an elite activity for millennia. Men had to be fit and own good weapons to the join the warband of a noble or king. Norse chiefs and their viking bands raided to increase their wealth and, therefore, the size of their warbands. But the Gaelic chiefs and kings had warbands as well and raided to support them. There was many a band of Fiana, young men who hunted and fought together, and eventually who might join the warband of a chief or king.

Even to join a fiana, a young man had to pass tests of fitness, but the tests are exaggerated in the tales of Fionn. The novice féinnidh or prospective member of the Fiana, had to stand in a hold up to his waist. He was given a shield and hazel stick to defend himself while nine of the Fiana threw spears at him. If he were hurt, he was disqualified. Then his hair was braided and the warriors of the Fiana chased him through the woods of Ireland. If he were caught and wounded, if his hair was disturbed, if a dead branch cracked under his foot or if he could not extract a thorn from his foot without slackening his pace, then he was unacceptable. (MacCana 1970: 108) A bit OTT.

Fionn and his men were considered just; in Gaelic ‘fair play’ is cothrom na Fèinne (the chance of the Fianna). But he couldn’t forgive the loss of Gràinne who was to be his wife. Gràinne was a beautiful woman, Fionn’s betrothed, but fell in love with someone else. In the early literary stories, Gràinne put the Fiana to sleep with a drink at a betrothal banquet. She compelled Diarmaid, a member of the Fiana, to elope with her by invoking magical terms of coercion called geasa.  In the oral tradition, Gráinne accidentally saw Diarmaid’s love spot or ball seirce and is magically attracted to him.

The lovers fled Ireland and sought refuge in Scotland. On the way to Scotland they slept on dolmens called ‘beds of Diarmaid and Gráinne’ (Leapa Dhiarmaid is Ghráinne). Dolmens are megaliths (huge stones) with two uprights and a capstone. To confuse Fionn’s magical powers of clairvoyance, they slept on sand inland and on heather near the sea. Fionn caught up with the lovers, but Oenghus the god arranged peace between them. During a boar hunt Diarmaid was injured, but he could have been saved by water carried to him by Fionn. But he brought the water too late to save Diarmaid. In other versions Diarmaid was invulnerable except for his heel, and by Fionn’s trick he trod on a poison bristle from a boar and died.

Fionn in the Landscape

Many places are named for incidents in the Fionn tales. The Fiana hunted the red deer on the island of Arran. Suidhe Fheargais (Seat of Fergus) is a peak on Arran named for Fergus of the True Lips who was the poet of the Fiana. His job was to compose poetry to incite the Fiana to deeds of valour. On the Island of North Uist a circle of twenty standing stones are called Popall Fhinn (Fionn’s People). Clach a’ Choin (Stone of the Dog) is a huge pillar stone on the shore of Loch Etive not far from Dunstaffnage, a castle in the West Highlands. Fionn is said to have tied his hound Bran to the pillar.

Staffa is an island near Mull and is famous as ‘Fingal’s Cave’. The entire island is made of basaltic columns, some nearly 50 ft high, which are the same stones as those of the Giants’ Causeway in the north of Ireland. Fionn, often portrayed in oral tradition as a giant, is supposed to have built the causeway from Ireland to Scotland to fight Benandonner, another giant. In another story Fionn was concerned about fighting the other giant. Sadhbh, his wife, dressed him as a baby and stuffed him into a cradle. Benandonner was so frightened by the ‘baby’ that he ran back to Scotland destroying the causeway as he went.

Fionn & the Fiana as Ancestors

The elites of many countries in western Europe have claimed descent from pagan gods to ‘prove’ they were of royal blood and suitable to rule. Norse rulers believed themselves descended from Odin. The Merovingian kings of Gaul (France) claimed descent from a powerful sea monster–and they had genealogies cooked up to show the world. Similarly the Gaelic families of Ireland and Scotland had genealogies to show their descent from heroic legends which were originally myths. Powerful families claimed characters from the Ulster Cycle, considered more prestigious than the Fionn Cycle. (Almqvist et al. 1987: 66) The Clan Campbell came to promince relatively late and were obliged to take an ancestor from the Fionn tales, Diarmaid ua Duibhne. The aos dàna (men of learning) chose Diarmaid for an ancestor because the Campbells had used the boar as their heraldic symbol for generations.