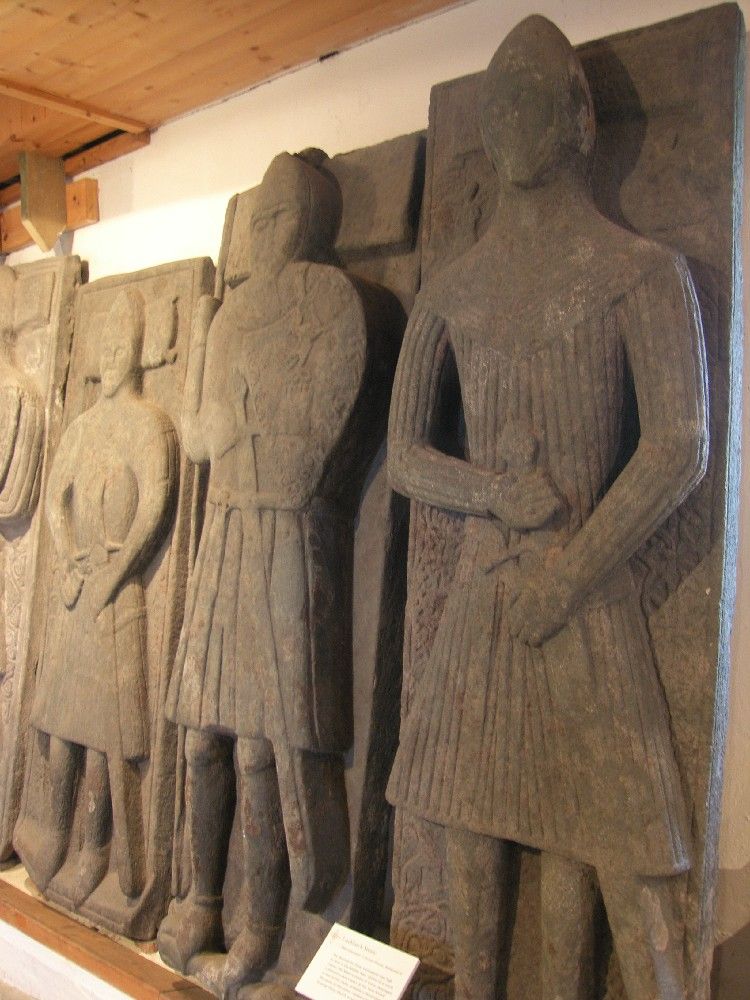 On the website Undiscovered Scotland there are two photos of West Highland tombstones. The captions say they are knights.

Were there knights in shining armour in the Highlands? Immediately some might think of tournaments with knights charging each other on huge horses in grassy Highland glens. The carvings of men in mail armour carrying enormous swords are found throughout the former Lordship of the Isles, but they were galloglasses–gall-òglaich–warriors from the West Highlands and Islands who went to Ireland to fight the English.

The most important function of the gall-òglaich was to enable the Gaelic chiefs in Ireland to resist the English Lordship of Ireland. (And occasionally to resist the ambitions of another Gaelic chief.) After years of bloody campaigns to quell the Irish,  ‘galloglasses’ and ‘kerns’ found their way into Shakespeare’s play Macbeth.

The merciless Macdonwald (i.e. MacDonald)
Worthy to be a rebel, for to that
The multiplying villanies of nature
Do swarm upon him–from the western isles
Of kerns and gallowglasses is supplied…

Galloglass comes from Gaelic gall-òglach  (plural: gall-òglaich) which means ‘foreign young warrior’. Kern comes from Gaelic ceatharnach (plural: ceatharnaich) which means ‘peasant, man fit to bear arms’. Irish spellings are a bit different. They were the bane of English soldiers, yet you will read histories of Ireland and not realise that galloglasses and kerns were warriors  from the West Highlands and Islands.

While in Ireland, they were billeted on the local population, a service called cuid oidhche. When the English tried to repress Gaelic customs in Ireland, they focussed on those which enabled the Gaelic chiefs to maintain an army. When the summer season of fighting was over, these warriors were paid, in the form of butter and beef, and sailed back to the Hebrides in time to harvest their crops. Later, in return for their military service, some gall-òglaich were settled in Irish lordships.

The gall-òglaich weren’t dubbed with a sword in rituals to become knights; they did not participate in tournaments like Sir Walter Scott’s Ivanhoe. Most did not ride horses to battle. Knights, mounted cavalry, belonged to the feudal aristocracy of French and Inglis-speaking Scotland, and they fought on horseback. Only those Gaels, who had developed a relationship with the Stewart kings and held their lands by charter, became knights in the Middle Ages. Sir Colin Campbell of Lochow, the progenitor of Clan Campbell was knighted in 1280 just before the Wars of Independence. Campbells and MacKenzies became most powerful as a result of their support for the Stewart kings at the end of the Middle Ages. Knighthoods were granted to the leaders of West Highland clans much later –in the 16th and 17th centuries when it was in their interest to support the Stewart kings. Rather late in the day.

The gall-òglaich were mercenary warriors, the elite descended from Somhairle mac GilleBrìghte, the progenitor of the most powerful Gaelic–Norse clans of the West Highlands and Islands of Scotland. They travelled to and from Ireland from the mid-13th century until the end of the 16th century. The first record of their service in Ireland was in 1259 when Aed O’Connor of Connacht  married a daughter of the Lord of the Isles. The O’Donnells, the ruling family of Tír Conaill (now County Donegal), hired gall-òglaich to drive the O’Neills out of the fertile country round the river Foyle. Aannalists noted that King Robert Bruce sent a force of galloglasses to help his brother Edward in 1316. The following is an anonymous poem composed for Toirdhealbhach Luineach Ó Néill to encourage him to fight the English in the 1570s. Clann Donald are some of the gall-òglaich who will be present at the battle. Or so the poet hoped.

Clann Domhnall will come to him what battalion is best in a fight? a bright-bladed battalion from the eastern land [Scotland] smooth palms round their sword hilts.

During the fourteenth century bands of gallowglasses spread out all over Gaelic Ireland to seek employment for their arms. These men from Innse Gall (The Hebrides) bore surnames such as MacDonald, MacCabe, MacRory, MacDougall, MacDowell and MacSheehy.

The men memorialised on West Highland grave slabs were warriors, but not knights in shining plate armour. Their armour was mail or the cotun, the quilted garment. The large horses bred to carry the knights in England or France were not found in the Scottish Highlands as the terrain is too mountainous. The sturdy Highland pony was more suitable. Still these men were employed in Ireland for centuries. They were warriors who did the job well.