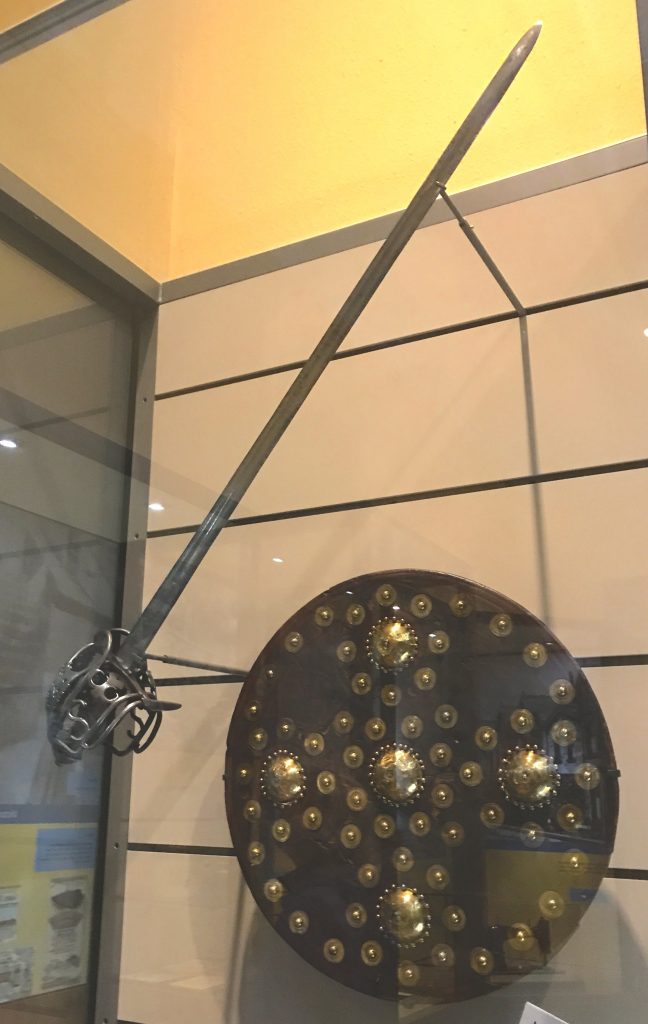 Alasdair MacColla MacDonald is credited with developing the Highland charge in Ulster in 1642 and introduced it to Scotland in 1644 during the Wars of the Three Kingdoms, known as the English Civil War in British history.

Alasdair’s men advanced, fired one or two volleys of musket fire, and then threw down their muskets, drew their swords and charged. In the graphic words of one of Inchiquin’s officers, they came ‘routing downe like a Torrent impetuously on our foot’. (Stevenson 1980: 251)

After the Battle of Culloden Highlanders were weary and hungry after days of marching on the retreat from England. The weapons of the Jacobite army were said to be antiquated and inadequate and they had little artillery. But what won their battles was the Highland charge.

‘The manner of fighting is to fire at about 30 yards distance, then fling down their muskets and run in upon the enemy with their swords and targets [shields], and I thing their weapons have muc advantage of our mustket and bayonet, after we have dischanrged as they take thepoint of the bayonet upon their target, and cut at the same time with their broadswords.’ –Gentlemen’s Magazine of 1745

The Jacobites perfected the technique of using the targe or target to deal with the enemy’s bayonets and thrown them aside while wreaking havoc with their swords. But at Culloden the Duke of Cumberland ordered his troops to thrust their bayonets at the exposed right flank of their enemy. The bayonets were not caught up in the targes and available for repeated use.

In 1715 a pamphlet on the Loch-Lomond expedition describes Highlanders sent to deal with Gregor MacGregor who was involved in the rebellion of that year.

…fourty or fifty stately fellows in their short hose and belted plaids, arm’d each of em with a well fix’d gun on his shoulder, a strong handsome target [shield], with a sharp pointed steel, of above half an ell in length, screw’d into the navel [centre] of it, on his left arm, a sturdy claumore by his side, and a pistol or two with a durk [dagger] and knife on his belt. (Caldwell 1981: 379)

It seems that in this period certain Highland men were well-armed indeed.

Muskets (musgan) were usually made abroad. In the Montrose campaign of 1644-45 their weapon was a matchlock musket, and carried powder charges in small clay vessels strung from a bandolier worn around the chest. Matchlock muskets were a little tricky to manage. The left hand controlled the musket and its stand while the right dealt with the ‘match’, a cord soaked in saltpetre and lit. When ready to fire the match was applied to the powder in the pan. The weapon was relatively easy to clean and maintain compared to the later flintlock. Some musketeers had swords, but the musket made an effective club in hand-to-hand combat. (Jörgensen et al 2005: 59) Matchlocks were developed in the 16th century and commonly used for over a hundred years.

The wooden ramrods were used for tamping down the ball and wadding in muzzle-loading guns. They were replaced by iron ramrods as wooden ones tended to break frequently.

During the Rebellion of 1745 Jacobite forces used ‘Brown Besses’ as well as flintlock muskets from France and Spain. Over 2300 muskets were captured compared to less than 200 broadswords. One of the Hanoverian commanders commented on the antiquity and poor condition of much of the Jacobite arms.  Whatever their enemy said, Jacobite swords were sharp and their muskets and pistols fired well enough to win several of the early battles of the rebellion.

Gunpowder could also be carried in a powderhorn, made from a cow or ox horn which was naturally hollow and waterproof. The horn could be filled from the wide end and the powder poured out in a controlled manner from an opening made in the tip of the horn. The horns could be heated and flattened and decorated with Celtic motifs. The inside and outside was polished so that the horn was translucent and the owner could see how much powder was left.

Swords, at least the blades, were often made abroad, but most weapons were made in Scotland. They were expensive and, therefore, a prized possession handed down through the generations.

From the end of the 15th century until the third quarter of the 17th century the sword favoured by Gaels was the two-handed sword  (claidheamh-dà-làimh). There were even a few used in the rebellion of 1745. The hilt was sometimes decorated with interlace designs. The crossguard was slanted a little toward the point, and terminated in a quatrefoil, a design of four ‘leaves’ like a four-leafed clover. The sword was carried in its sheath over the shoulder or under the arm. It was too long to attach to a waist belt.

Around 1600 a single-handed sword (claidheamh) with a basket-hilt became more common, and many two-handed swords were cut down and a basket hilt added. The new hilt had a rounded guard for the hand with an aperture for the hand at the back. The decorations on the bars could be saltires (diagonal crosses) with ribbons, snouted or beak-nosed. The swords had two or three flutes, grooves down the length of the blade which were meant to lighten the blade without decreasing its strength. The Highland broadsword was used for cutting, not thrusting. Here is an 18th century opinion of its value:

‘Now to compleat this grand Dress they wear a broad Sword, which they call a Clymore, a Stroke of which delivered from one of the Hands, would be sufficient to chop off the Head of the strongest Champion that ever lived,’ (Caldwell 1981: 391)Lord George Murray shouted  ‘claymore’ (claidheamh-mòr) as he drew his broadsword and fought in a skirmish at Clifton in 1745.

It has been long thought that the Highland basket-hilted sword developed from the Italian schiavona, the basket-hilted sword carried by Dalmatian troops in the service of the Venetian Republic. However, the Highland sword may have developed, not in Italy, but from the hilts of a late 16th century German curved sword of which many survive in Norway. No one knows for sure.

All swords of proven Scottish origin date from about 1670.  Andrea Ferara was a legendary swordmaker, reputedly Spanish or Italian. But blades carried his name. He may have been Andrea dei Ferari who worked in Venetia (Venice) in the second half of the 16th century. While some blades might have been made in Italy or Spain, others were manufactured in Solingen, Germany. They were famous for their ‘great breadth, suppleness and fine temper’.  Blades two inches wide with three flutes, and bearing a gold cross and orb (ball) are thought to be genuine Andrea Ferara blades. The cross and orb is the sign of the Chartreuse Monastery in France. They made swords and armour in the Middle Ages (and still make a fine liqueur). Alexander MacDonald of Keppoch, killed at the Battle of Culloden, had such a blade.

A man with a sword had to use it honourably as the Gaelic proverb has it: Na tarraing mi gun adhbhar, is na pill mi gun chliù. (Do not draw me without reason nor return me without honour.)

A targe (targaid) was a two-foot target or round shield made of wooden boards and outside covered with tooled leather and the inside with deerskin, fur out. It was held together with brass fittings, and on one type a stiletto or spike was ‘screwed into the navel of it’, that is, into the middle of it. According to a description of 1752:

‘…they wear a Target, composed of Leather, Wood and Brass and which is so strong, that no Ball can penetrate it, and in the middle of this Target there is a Screw Hole, wherein is fix’d a brass Cup lined within with Horn, which serves them to drink out of upon Occasion; and in the Time of Action it serves for to fix a bayonet in.’ (Caldwell 1981: 391)

The central boss had a cup about 3 inches across which could be unscrewed and used for drinking whisky (uisge beatha)! Then the spike was screwed into the middle of a smaller boss underneath, the true boss, in the centre of the shield. When not in use the spike was stored in a leather sheath on the inside of the targe.

Lord George Murray, one of the Jacobite leaders of the ‘45, was painted carrying one. They are also pictured on the contemporary battle scene at Culloden (1746) painted by David Morier. According to the drawings of the Penicuik artist, the targe could be held up to protect the head while fighting with the sword.

The dirk (biodag) is distinct from many daggers by the lack of a cross guard to protect the hand. The dirk’s handle was usually made of wood with Celtic carvings on it and the top was covered in brass. The blade was fluted on the face and and notched on the back.

The length was about 18 inches from the point to the end of the handle, almost a mini-sword.

The earliest pistols (dagaichean) made in Scotland date from the first half of the 17th century, but earlier ones were imported from the Netherlands, Germany or Denmark.

They were made in pairs, made to be carried in the left and right hands.

They are known by the design of the end of the handle: a fish-tail as they were called in the 20th century.  The earlier type has a wooden handle with head of a bird, later stylised, carved on it. In 1602 a pair from Copenhagen have metal mounts on the handles, and by mid-century the handles are metal with the same design as the wooden ones.

The powder available in this period resulted in a ball fired with limited velocity. A large bore made up for that. (Caldwell 1981: 327)

The most important part of the pistol was the firing mechanism. The development of the wheelock, more efficient and reliable than the matchlock, allowed the manufacture of pistols as well as culivera, shorter type of musket. But loading was slow and pyrites, the material used to create the spark had to be replaced often.