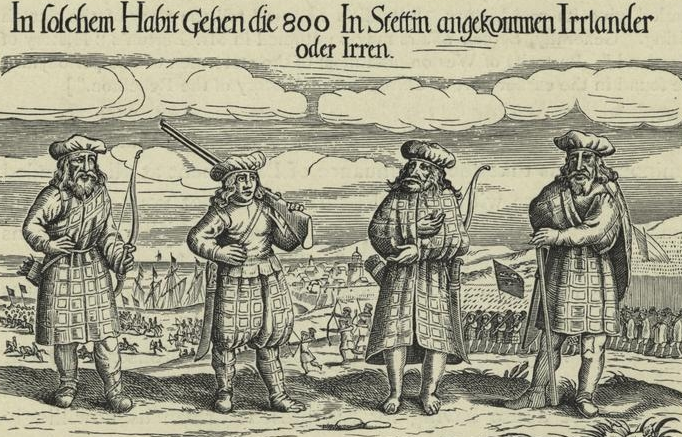 Highland Dress of the Seventeenth Century

On a trip to Italy many years ago, a half dozen Canadian scouts wore kilts. They were amazed at the reaction to their uniform. Italians aren’t shy about staring — they tripped over curbs, walked into signs and bumped into shop windows. Highland dress is as noticeable today as it was centuries ago, and quite different from mainstream European clothing.

Kilt, an English word of Norse origin, means ‘tucked up’. The older garment of two loom-widths is called féileadh mór (big kilt) in Gàidhlig, The garment of one loom width is called  féileadh beag (little kilt), anglicised as ‘philibeg’.

In the late 16th century, fashion was influenced by the court of Spain, and European elites including the Tudor court were starched, padded, stitched and boned into their clothing to the point of being hardly able to breathe. In contrast, the clothing of the Highlands was comfortable with great freedom of movement.

However, in the same period, Highlanders (Scottish Gaels) developed a very distinctive style of dress. Actually it was very simple. Both men and women wore a lèine, a shirt or shift of linen, which, as you may imagine, was longer for women than for men. The outer garment was called the breacan-an-fhéilidh, the tartan kilt or simply the fèileadh, kilt, arectangle of cloth up to 2 yards wide and 12 yards long, sewn together along the length. The amount of cloth in the fèileadh depended on the wearer’s wealth. The fineness and weight of the wool depended upon weather and also the ability to pay.

It was worn by Gaelic-speaking Scots for about 200 years. For most of this period no Lowlander would be caught dead in a kilt, the clothing of heathens and barbarians.

The upper portion could be arranged in several ways: the top could be drawn over the head and shoulders in case of bad weather, or the left-hand corner passed over the left shoulder from behind, and fastened there with a bone or wooden pin or brooch. The rest of the upper part was passed under the belt in a way that less was seen from the front.

Taylor the Water Poet was an Englishman who gathered subscriptions for an account of his travels called  ‘The Pennylesse Pilgrimage’. He proposed to travel to Scotland without a penny, and he wouldn’t beg or ask for food or lodging. He must have been a good talker. In 1618 he went to Scotland and was invited by the Earl of Mar to join the hunting and feasting in Braemar. Here’s a description of Highland dress in that period.

‘For once in the year, which is the whole month of August, and sometimes part of September, many of the nobility and gentry of the kingdom … do come into these high-land countries to hunt, where they do conform themselves to the habit of the High-land-men, who for the most part, speak nothing but Irish [that is, Gàidhlig]: and in former time were those people which were called the Red-shanks [red legs].’

Irish Gaels did not wear the fèileadh; it developed in Gaelic Scotland in the period where travel and communication between Scotland and Ireland were disrupted by war.

Highlanders were called Irish from the 16th century to the end of the 18th.

‘Their habit is shoes with but one sole apiece; stockings … made of a warm stuff of divers colours, which they call tartan: as for breeches, many of them, not their forefathers never wore any, but a jerkin of the same stuff that their hose is of, their garters being bands or wreathes of hay or straw, with a plaid about their shoulders, which is a mantle of divers colours, much finer and lighter than their hose, with blue flat caps on their heads, a handkerchief knit with two knots about their neck; and thus they are attired.’

Now their weapons are long bows and forked arrows, swords and targes [shields], harquebusses [long guns], muskets, dirks, and Lochaber axes. With these arms I found many of them armed for hunting. As for their attire, any man of whatever degree that comes amongst them, must not disdain to wear it … This was the reason that I found so many noblemen and gentlemen in those shapes … My good Lord Marr having put me into that shape I rode with him from his house.’

MacKays in the Thirty Years War

A German broadside of the Thirty Years War shows four Highland soldiers about 1631, and they are called ‘Irish’, but they are Scots probably of MacKay’s regiment. The man second from the left wears tartan in the style of mainstream Europe with very baggy

breeches. The two on the right wear the breacan-an-fèilidh, the belted kilt, one with the upper part pulled over the shoulders and the other with the left arm exposed. Usually the right arm, the sword arm, is exposed.

‘Trews’ are trousers in Lowland Scots and triubhas in Gàidhlig. They were cut on the bias for greater flexibility, and it created a nice diamond pattern. Gentlemen used long or short triubhas under the fèileadh especially for riding. These close-fitting trousers were worn by Gaels for centuries. The image of a horseman wearing short triubhas comes from the book of Kells, written about AD 800.

After the repressive years of the Cromwellian Protectorates (1650s), clothing in England exploded into wild fashions with men wearing ‘lace, ribbon loops and bows from their hats to their shoes’. Men wore what were commonly called petticoat breeches. As a contemporary wrote in The Life and Times of Anthony Wood about 1663:

‘A strange effeminate age when men strive to imitate women in their apparell, viz. long periwigs, patches in their faces, painting [their faces], short wide breeches like petticoats, muffs and their clothes highly scented, bedecked with ribbons of all colours.’

Highland dress was also exuberant during this period — but more manly IMO. Lord Mungo Murray (1668-1700), a younger son of the Marquis of Atholl was painted in the 1680’s. He wears a slashed doublets — slashed doublets were popular in mainstream Europe in the early 16th century, but still worn in Gaelic Scotland and Ireland in the mid-18thcentury. His tartan is predominantly red stripes on a gold background. Gold of course was the symbol of the nobility.

Today, in the U.S.A. and parts of Canada, the word ‘plaid’ refers to the chequered pattern or sett of the kilt. However in Scotland ‘tartan’ refers to the chequered pattern and the plaid is the upper garment often worn wrapped under the right arm and pinned with a brooch on the left shoulder. Plaid comes from Gàidhlig plaide meaning ‘blanket’. The pronunciation in 18th century Scotland may have rhymed with ‘dad’, but today it rhymes with ‘maid’.

Most books about Highland dress deal with it as it developed from the late 16th century. In another blog I’ll write about the earlier clothing which was worn both by Scottish and Irish Gaels.