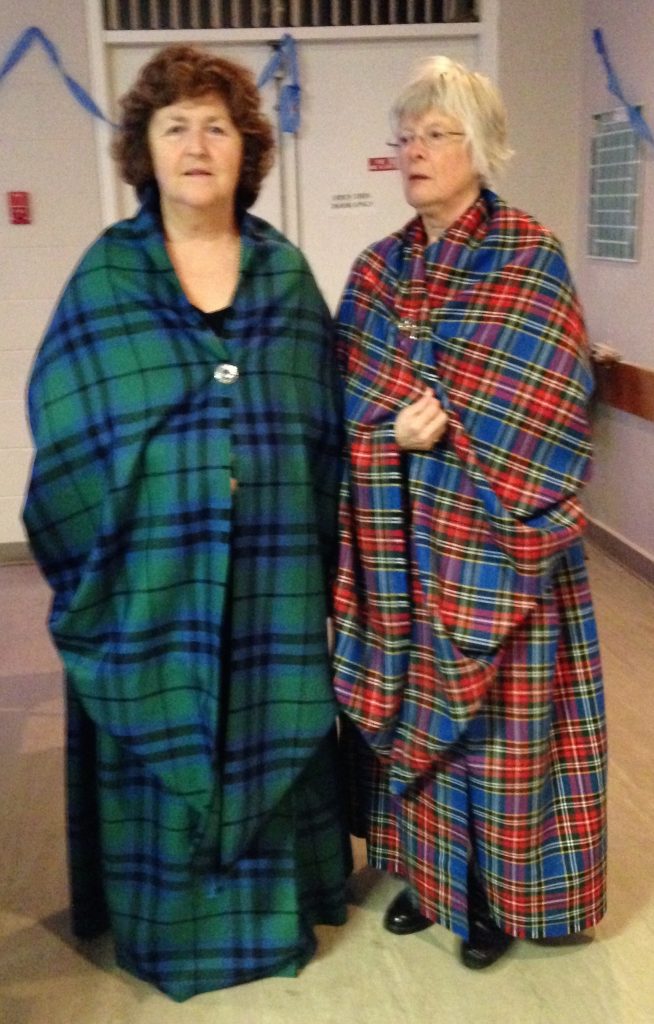 Martin Martin was a gentleman from the Isle of Skye who wrote a book called The Description of the Western Isles of Scotland about 1695. He was trying to persuade Lowland Scots that really the Highlands were not as uncivilised and barbaric as they thought. He often says that customs considered odd or archaic among the English-speaking peoples no longer existed. He phrased it, ‘there is no instance of this for fifty years past.’

‘The ancient dress wore by the women, and which is yet wore by some of the vulgar, called arisaid [earrasaid], is a white plaid, having a few small stripes of black, blue, and red.’

The earrasaid was the outer garment for women, and likely it was of three loom-widths whereas the men’s fèileadh (kilt) was of two loom-widths. My friends and I decided on a little experiment. We made earrasaidean for ourselves and we found that when the top was worn over both shoulders, the triangular shape looked like the men’s garment.

The plaid or plaide as it is in Gàidhlig means ‘blanket’, that is, a large rectangle of cloth. I believe that two lengths of woollen cloth were sewn along the selvege edges to make the fèileadh (kilt) for men, and three to make the earrasaid for women.

The foundation garment for both men and women was the lèine, the shirt or shift. The men’s was shorter than the women’s as one might expect. Martin doesn’t mention it because  people usually wore linen next their skin.

Martin said that the earrasaid was no longer worn by gentlewomen in the 1690s, but the belts and brooches he did see were expensive. Likely the earrasaid was still worn but Martin wanted to make Highlanders seem more ‘civilised’ by wearing the same clothing as Lowlanders.

‘It [the earrasaid] reached from the neck to the heels, and was tied before on the breast with a buckle [bucall? bràiste?] of silver or brass, according to the quality of the person. I have seen some of the former of a hundred marks value. It was broad as any ordinary pewter plate, the whole curiously engraved with various animals, &c. There was a lesser buckle which was wore in the middle of the larger, and above two ounces weight. It had in the centre a large piece of crystal, or some finer stone, and this was set all round with several finer stones of a lesser size.’

‘The plaid being plaited [pleated] all round, was tied with a belt below the breast. The belt was of leather, and several pieces of silver intermixed with the leather like a chain. The lower end of the belt has a piece of [pewter?] plate about eight inches long and three in breadth curiously engraved, the end of which was adorned with fine stones or pieces of red coral.’

‘They wore sleeves of scarlet cloth, closed at the end as men’s vests, with gold lace round them, having plate buttons set with fine stones.’

He doesn’t say if the women wore red dresses with sleeves attached under the earasaid or whether the sleeves were attached to a waistcoat. In my novel I decided she wore a dress or kirtle, as it is in English, under her earrasaid.

‘The head dress [for married women] was a fine kerchief of linen strait about the head, hanging down the back taper-wise. A large lock of hair hangs down their cheeks above their breast, the lower end tied with a knot of ribbands.’

In the Banshee of Castle Muirn the hero saw the heroine in Highland dress:

‘A file of women approached from the village and parted the crowd. The leader, her grey-streaked hair loose on her shoulders, processed to the sea, followed by young women. They wore what women wear: linen shift, red wool kirtle and the earasaid, a mantle of three loom-widths. But their belts and brooches glinted with precious stones while most of the women wore a simple pin and a plain belt over the earasaid. Two women carried cloth-wrapped bundles.’

If you have any additional information about women’s dress, please do make a comment.