Just what is a fairy? 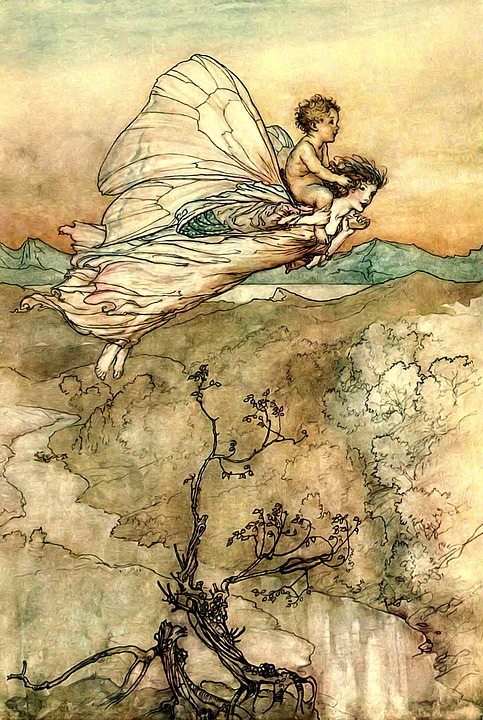 Broadly speaking, a fairy is a being of human form with magical powers, a being who loves to intervene in human affairs. They are good, mischievous or evil. Fairies are often thought to be tiny, and that’s why you don’t see them. Benign fairies are small, well-dressed in red, green, gold or blue, and they are very good-looking. They can can shape-shift or become invisible at will. In English tradition, they have gossamer wings protruding from their backs.

Most live in palaces underground where they enjoy themselves playing instruments and dancing. Some are kindly, but some exploit human greed for their amusement. Their gifts of money and possessions often turn to leaves, dust or stones. The best way to avoid trouble with them, is to refuse their offers of great wealth, and quietly go about your business.

People have been quite creative with spelling: faerie, fayerie, feirie, feyrie, ferie, pherie, pharie and so on! The word was borrowed from Old French faerie or faierie which referred to the world of the fairies. In Old French a fairy was a fae and in modern French she is a fée. All these words developed from fatum, the Latin word for destiny. To the Romans Fata was the goddess of fate. In France she is still believed to have the ability to influence a person’s destiny.

Why was the word borrowed into English? Because of the Norman Conquest (1066 and all that). The first language of the kings of England was French for about 350 years after that event. And people who speak the same language share not only words but also beliefs in the supernatural. La fée Morgane is the fairy in the Tales of King Arthur.

The Normans liked the idea that Arthur fought against the Saxons in the 5th century as had the Normans in the 11th century. Stories about this British war leader seemed to justify their conquest of Britain. See Geoffrey of Monmouth’s History of Britain for a very different version of King Arthur. These tales became the favourite subject of minstrels and the party theme for many a feast.

So fairy is a word borrowed from French. You’d expect that fairy-like folk must have existed in Britain before the Norman Conquest. And you’re right. The original word in English for fairy is elf, aelf in Old English, and this entity is found in Germanic folklore. In Anglo-Saxon times, people said healing charms for ‘elf sickness’ as they believed elves shot arrows at human beings and animals to make them sick. The ‘proof’ of the existence of the elves and the harm they caused were prehistoric flint arrowheads found all over England. In some areas, elf men were thought to be like little old men, but the women were beautiful. They were believed to live in kingdoms as did human beings.

The word fey, meaning ‘unworldly’ or ‘about to die soon’, is a word of quite different origin. It is used in Lowland Scots or Scots English and comes from Old English faegr meaning ‘unhappy, doomed to die soon, on the point of death’.

But there were no entities called fairies in the Highlands. They had another name, sìthichean.